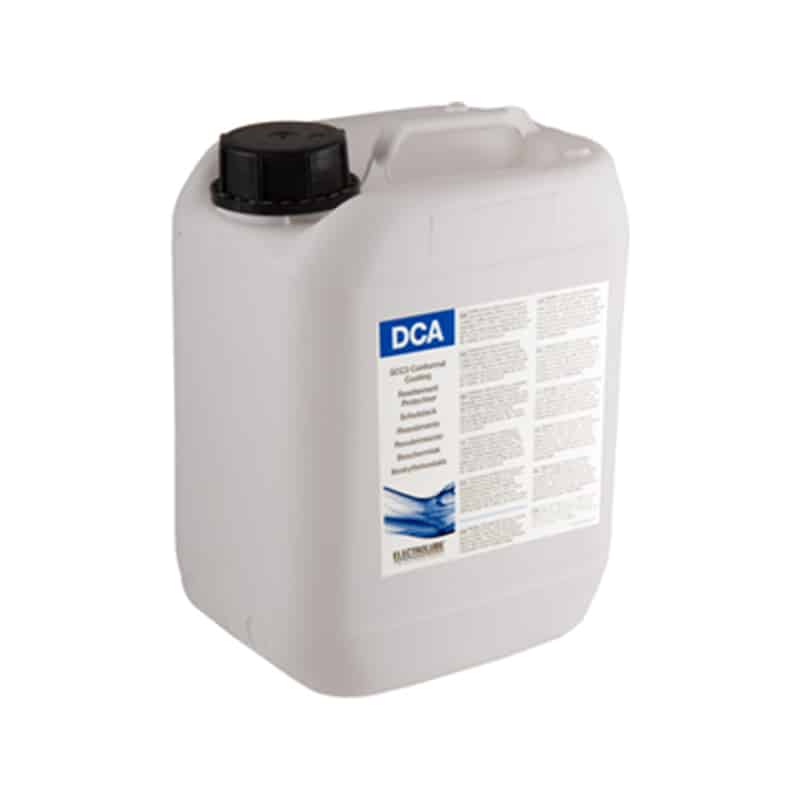 DCA is a flexible, transparent and unique modified alkyd conformal coating specifically designed for the protection of electronic circuitry.

DCA is a flexible, transparent and unique modified alkyd conformal coating specifically designed for the protection of electronic circuitry. It has been formulated to meet the highest defence standards in both Europe and the United States. It holds approvals including the British Ministry of Defence (MOD) DEF-STAN 59/47 Issue 4, and Underwriters Laboratories UL746E-QMJU2.

DCA can be sprayed, dipped or brushed. The thickness of the coating depends on the method of application (typically 25-75 microns). Temperatures of less than 16°C or relative humidity in excess of 75% are unsuitable for the application of DCA. As is the case for all solvent based conformal coatings, adequate extraction should be used (refer to MSDS for further information).

Substrates should be thoroughly cleaned before coating. This is required to ensure that satisfactory adhesion to the substrate is achieved. Also, all flux residues must be removed as they may become corrosive if left on the PCB. Electrolube manufacture a range of cleaning products using both hydrocarbon solvent and aqueous technology. Electrolube cleaning products produce results within Military specification.

DCA needs to be diluted with the appropriate thinners (DCT) before spraying. The optimum viscosity to give coating quality and thickness depends on the spray equipment and conditions, but normally a dilution ratio of 2:1 (DCA:DCT) is required. Suitable spray viscosity is typically 50-80mPa s. If bulk coating material has been agitated, allow to stand until air bubbles have dispersed. DCA is suitable both for use in manual spray guns and selective coating equipment.

The selected nozzle should enable a suitable even spray to be applied in addition to suiting the prevailing viscosity. The normal spray gun pressure required is 274 to 413 kPa (40 – 60 lbs/sq.inch). After spraying, the boards should be placed in an air-circulating drying cabinet.

When applying DCA in aerosol form care must be taken to ensure the can is not shaken before use. Shaking the can will introduce excessive air bubbles and will give a poor coating finish.
The can should be held at 45°, and 200mm from the substrate to be coated. The valve should then be depressed when the can is pointing slightly off target and moved at about 100mm/s across the target. To ensure the best coating results are achieved try to use a smooth sweeping motion with small overlap for successive rows.  To ensure penetration of the coating beneath the components and in confined spaces, spray the assembly from all directions to give an even coating. After spraying, the boards should be placed in an air-circulating drying cabinet.

Ensure that the coating material in the container has been agitated thoroughly and has been allowed to stand for at least 2 hours for all the air bubbles to disperse.

Conformal Coating Thinners (DCT) should be used to keep the DCA coating at a suitable viscosity for dipping (180 – 250mPa s @ 20°C). DCT is added periodically as the solvent evaporates. The viscosity should be checked using a viscosity meter or “flow cup”. The board assemblies should be immersed in the DCA dipping tank in the vertical position, or at an angle as close to the vertical as possible. Connectors should not be immersed in the liquid unless they are very carefully masked. Electrolube Peelable Coating Masks (PCM/PCS) are ideal for this application.

Leave submerged for approximately 10 seconds until the air bubbles have dispersed. The board or boards should then be withdrawn slowly (1 to 2s/mm) so that an even film covers the surface. After withdrawing, the boards should be left to drain over the tank or drip tray until the majority of residual coating has left the surface. After the draining operation is complete, the boards should be placed in an air-circulating drying cabinet following the curing schedule (shown below).

Ensure that the coating material has been agitated thoroughly and has been allowed to settle for at least 2 hours. The coating should be kept at ambient temperature.

When the brushing operation is complete, the boards should be placed in an air-circulating drying cabinet following the curing schedule (shown below).

The properties gained from DCA are dependent on the curing schedule employed. It is essential that the coating be allowed a minimum of two hours drying time at ambient temperature prior to any heat curing. This is necessary to allow the solvent system to evaporate.

Ambient curing is via solvent evaporation only. Eliminating the heat curing step will reduce solvent resistance. Other properties, such as resistance to humid and corrosive environments, may also reduce but still meet the requirements of many industry standards. Coated boards should be left at room temperature for the solvent to evaporate; extraction is required in the curing area.

Most commercial users will gain satisfactory performance from this coating by curing for two hours at 90°C after the two-hour ambient cure. This will give limited resistance to solvents.

It is recommended that the coating be thoroughly cured on circuits, which have design areas of very high impedance that require adjustment after application.

DCA contains a UV trace, which allows inspection of the PCB after coating to ensure complete and even coverage; the stronger the reflected UV light, the thicker the coating layer is. UV light in the region of 375nm should be used for inspection.

To request any type of technical sheet or safety sheet.

Please send us your request to receive customized support by your local dealer, either for specific products or special requirements.