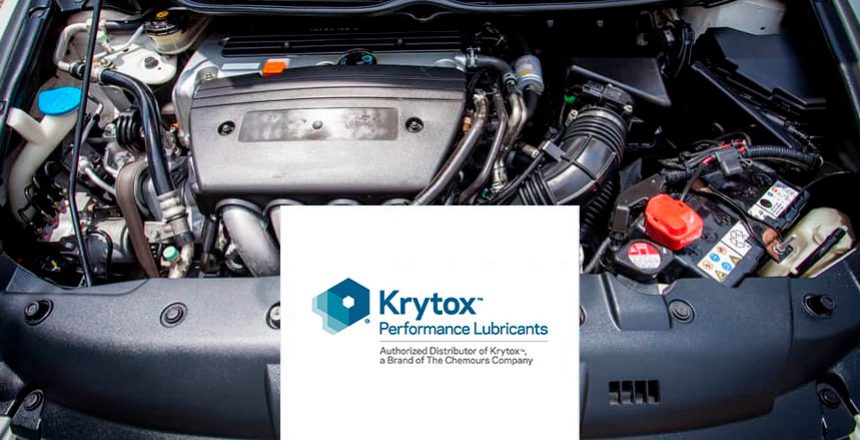 An Engine of Improvement

Whether it’s in conditions of extreme temperature and pressure, under severe shock loads or when exposed to harsh chemicals, there are multiple ways that PFPE engine lubricants can be applied to meet the needs of design engineers in order to improve engine compartment performance and reliability.

Engine compartment temperatures are now regularly approaching, and in many cases exceeding 150 °C.The ability of drive bearings, in terms of both thermal stability and durability requirements, are often beyond the capabilities of high-end hydrocarbon-based lubricants. Specialized grades of PFPE engine lubricants, such as Krytox™ Lubricants, have been formulated specifically to meet the need for stability and sustained performance when exposed to extreme temperature ranges.

Within engine-driven cooling fans, ball bearing operating temperatures can reach nearly 200 °C. In addition, the difference in thermal expansion rates between the steel bearing and cast aluminum housing can force the bearing into negative clearance. Krytox™ PFPE greases are often chosen by engineers to reduce bearing failures due to their unmatched thermal stability and superior lubricant film-forming capability.

As engine temperatures rise, the operating temperature of the alternator bearings can exceed 160 °C. Operating speeds can also exceed 12,000 RPM, hence why superior lubrication of alternator bearings is required to avoid costly failures. High performance PFPE lubricants, such as Krytox™, give design engineers a solution that will endure high temperatures, shear rates and bearing loads.

Grease Is the Word

A company in China was chosen to manufacture a new alternator model, including an innovative hydraulic clutch release bearing, which had been designed and specified in Europe.

However, the manufacturer faced a challenge with hydrocarbon grease contaminated by the hydraulic fluid – causing the bearing to fail due to compromised lubricant performance. Working with Krytox™, the client found a cost-effective solution that delivered good chemical-resistant performance that wouldn’t be negatively affected by traces of hydraulic fluid. In addition, because of its superior elastomer compatibility, it worked to improve the life of the rubber seals too.

Valves: Flowing in the Right Direction

A key target for design engineers – and one that is being legislated by governments around the world – is the reduction of nitrogen oxide (NOx) emissions. The exhaust gas recirculating (EGR) valve is an essential engine component that helps to achieve this.

If the valve doesn’t open enough, insufficient recirculation can lead to excess pollution. However, if the valve sticks open, the temperature inside the cylinder can drop too much – decreasing
engine performance and fuel mileage.

Effective lubrication is once again key to ensuring optimum performance, and Krytox™ Lubricants have become an ideal choice in the industry, as they withstand the high temperatures and
exhaust fumes experienced by the EGR valve.

Reliability under harsh conditions is essential for the success of the EGR valve. A German manufacturer of gear-operated EGR valves came to us to find a lubrication solution able to cope with temperatures ranging from -40 to 200 ˚C as well as heavy vibrations. The goal was to improve lubricant durability and, hence, extend reliable valve service life. Working together, we suggested a specific Krytox™ high temperature grease grade to fix the particular valve issue. This improved reliability, and, as a result of savings on lubricants and warranty claims, contributed over 80,000€ to the bottom line annually.

With an increasing number of components all having to work together, seals are becoming evermore important under the hood.

That’s why the seemingly simple O-ring has become so important, and why, once again, lubrication has become so vital to their efficient installation and functioning.

Lubricants are often applied to keep seals in place and undamaged during assembly. Getting the choice right is critical. The wrong lubricant could mean the seal degrades, causing premature
damage. The preferred choice amongst many automotive engineers is Krytox™ because of its compatibility with all seal materials. Furthermore, Krytox™ Lubricants do not oxidize, so they
don’t contribute to degradation and also have greater temperature stability than the seals themselves. The net result is more durable O-rings and increased under-the-hood reliability.

When the Going Gets Tough

Heavy duty industrial engines face many stresses. A US maker of trucks and heavy-duty off-road equipment came to Krytox™ with a problem. The lubricant they had been using during installation wasn’t working well enough.

This was leading to O-ring leaks after delivery and a high number of warranty claims. What’s more, the mineral oilbased grease the company had been using carbonized at high temperatures, resulting in even more O-ring failures. By switching to the recommended Krytox™ grease grade, the manufacturer gained the adhesion properties needed to improve O-ring retention during assembly. The grease’s long-term resistance to high temperature also helped to eliminate failures due to carbonization. Now, the manufacturer has seen a significant reduction in both inservice
leaks and failures.

In these fascinating documents, explore how Krytox™ Performance Lubricant, the leading expert in automotive lubrication, takes inspiration from its years of experience and offers unique properties that increase the service life of critical components, allowing bearings to run efficiently and last longer, for superior and reliable performance.
Free Download